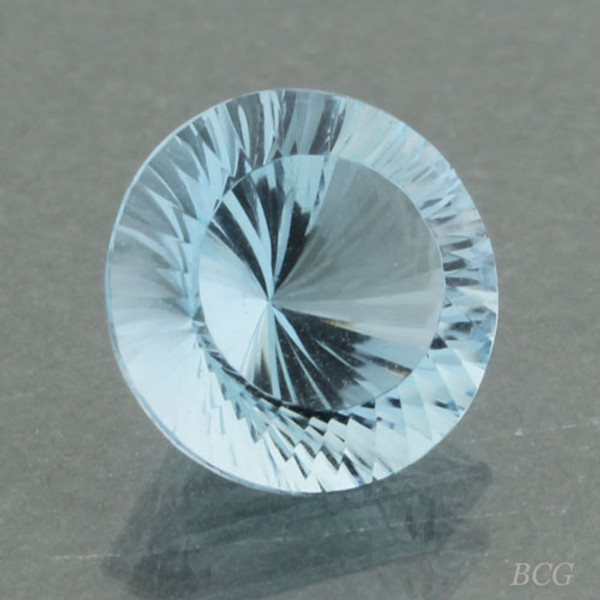 Sky Blue Topaz that has been custom faceted into a concave cut called the "Vortex Round."  Sparkles galore!  The dark spots in the gem are a reflection of the camera lens.

Beloved by Egyptian pharaohs, topaz is the ultimate gem for promoting self-control. Wearing topaz is supposed to bring forth leadership qualities and help its wearer to take control of difficult situations.

The Concave cut is three dimensional; where as the traditional flat faceted cut gemstones are two dimensional. The concave cut not only has facets in the length and width of the gemstone but also has conical shaped facets to create more depth. This third dimension further refracts the light as more ambient light, thus returning it to the eye as more brilliance in the gemstone.

A two dimensional gemstone will need light to show its brilliance, a Concave cut gemstone will reflect the smallest amount of light. The gem will return to the eye, brilliance from even a small single candle that has been lit in a darkened room.

This Sky Blue Topaz is a Perfect gem for a unique jewelry piece such as a ring or a pendant!