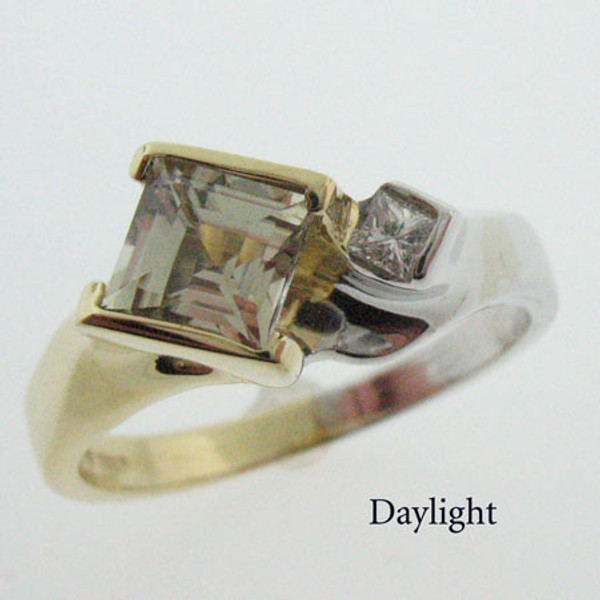 Designer ring featuring one of the Rarest gems on earth! Zultanite, amazingly beautiful and mysterious, a 100% natural colored gemstone with a color shift from Kiwi Green to Champagne Pink in different lighting. This Zultanite has been expertly faceted into a Princess Cut design and set into 14KT Yellow and White Two Tone Gold. Half of the ring is white gold and the other half is yellow gold, how clever is that? Adorned with an elegant Princess Cut Diamond accent. This exotic gem, a magnificent .75 carats, is a work of art! Zultanite is a rare, color change Diaspore gemstone that has been oriented to maximize its color-change properties. Zultanite is breath taking to say the least. The color shift is amazing!

Ring size: 7 Ring can easily be sized up or down by your local jeweler.

Paul Dangler designed this piece. He is the winner of many design awards including DeBeers Diamonds Today award.

YOU WILL NOT FIND ANYTHING LIKE THIS RING IN A JEWELRY STORE ! IMAGINE THIS RING ON YOUR FINGER! I AM TALKING DIFFERENT! A RING LIKE NO ONE ELSE HAS, NOT LIKE THE THOUSANDS THAT ARE MASS PRODUCED. HAVE A GEM THAT COLOR SHIFTS FROM KIWI GREEN TO PINK CHAMPAGNE, WOW!!!! THAT WOULD BE SPECTACULAR! IT IS SPECTACULAR!!

Imagine owning this rare and unique gemstone that is so very scarce that tons of ore need to be extracted to be able to reach these amazing crystals. It is extremely difficult to mine Zultanite in the remote location of the Anatolian Mountains, Turkey.  Zultanite has had several wells dug and purchased a humongous generator to make life easier for their workers (e.g. air conditioned housing and showers with hot water.)

Want something that nobody has or how about a great conversation piece? Be the envy of your friends with this unique piece of designer jewelry featuring Zultanite, this very rare, collectible, color change gemstone!