Growing Up on the Farm E Book 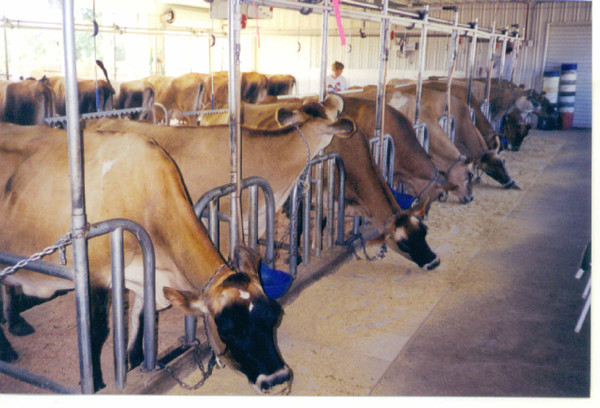 Growing Up on the Farm E Book

This book is about Ron's life as he was growing up on the farm.  It is 134 pages long and includes some pictures of the items that he used on the farm.

Here is an excerpt from the beginning of the book:

I was born in 1953, and was the youngest of five children. I've always said when they had me, that they finally got it right, so there was no need for any more. I have 3 brothers and one sister. My oldest brother, David, is seventeen years my senior and my sister, Carol, is fourteen years older than me. Next in line is my brother Steve who is five years older and then my brother Mark that is four years older than me. None of my siblings are that close to me in age. I was always trying my best to keep up with the rest of the family. I believe that I matured much faster by being around much older siblings.

My mom and dad were full time dairy and crop farmers, on a farm consisting of 400 acres in Southwest Michigan. In that day and age that was quite a large farm. It was actually two farms that shared a common property line. The 100 acre farm to the South was my grandpa's, which was my dad's dad, and the 300 acre farm to the North was my parents’ farm.

My parents had moved to the farm where I grew up, on December 18th of 1950. They had an opportunity to work the farm on shares and they gladly took advantage of it. Up until that time they had only been living and working on my grandpa's farm from the time they got married in 1935. My dad was now also renting and working another 80 acre crop farm that was about a mile south of us. The combination was a lot of acreage to farm back in that day and age.

David landed a job at a McDonald's restaurant. The McDonald's back in that time period was much different than the ones of today. There wasn't any sit down area. It was take out only, and the menu consisted of hamburgers, cheese burgers, French fries and Coca Cola. That was it.

The potatoes came into the restaurant whole, in burlap sacks that held a hundred pounds of potatoes. And the Coca Cola syrup came in glass gallon jugs. My brother had permission to bring the empty used burlap sacks home as well as many of the empty gallon jugs. It actually saved the restaurant money because they were just going to be thrown away, so it saved them from the disposal fees.

We used the glass jugs to store apple cider in the fall. The burlap sacks were used to hold wheat, oats, barley and rye at harvest time. In those days we would harvest the grain with our Allis Chalmers, All Crop, model #60 combine. The grain was then transferred from the combine by an auger, one sack at a time, from the combine to a flat wagon where you held a burlap sack under the end of the auger. That is how you hauled the crop in from the fields in those days.

EBook: Before You Buy Your First Piece of Rural Property