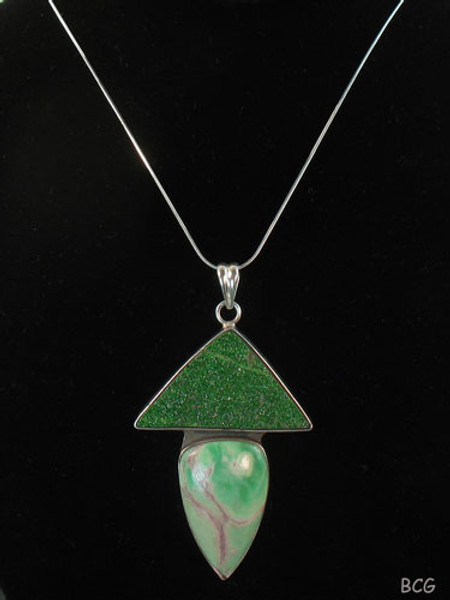 Genuine Drusy! Very Rare Emerald Green Uvarovite Druzy from Russia cut into trilliant shape and bezel set into .925 sterling silver with a teardrop shape Variscite cabochon.  8-sided sterling silver snake chain included that is 18 inches long.  I handpicked this beautiful and very rare necklace out myself, there is only one of these!

Your beautiful Drusy necklace will arrive in a nice gift box.

Uvarovite is a rare, lush emerald green garnet and sometimes confused with emerald because of its vivid green color. Distinguishing Uvarovite between Tsavorite and Grossular Garnet is done through analyzing their chemical compositions.  Uvarovite was named from a Russian Statesman and mineral collector Sergey Semionovich Uvarov.

Uvarovite is often found in drusy form. Uvarovite Druzy  is made up shiny, tiny, calcium chromium silicate emerald colored crystals inside a  rock.

Giving someone special a Uvarovite is a symbol of something that is very precious and lasting.

Variscite a fairly rare stone is often mistaken for turquoise, but is greener in color.  It is also known as Utahlite as it is found in Utah.

Variscite is said to promote a serenity of balance and universal love, give one courage and undo bad habits.   Variscite is a stone of prosperity with your finances.

Healers were said to use Variscite to enhance learning ability, relieve stress and increase logic and reasoning.

Drusy is a cabochon of many tiny glittery crystals that catches your eye and makes any jewelry piece command attention.

Drusy is tiny crystal covered rock. Very small quartz crystals that form within the cavities of rocks.   Geodes have Druzy crystals that often form inside of them.

If a Geode rock is cracked open may disclose beautiful tiny crystals inside. These tiny crystals are called Druzy or Drusy and they look like a lining of glittering stardust inside the rock.

Many millions of years ago a cataclysmic event caused molten rock to be forced to the earth’s surface with amazing heat and pressure.  The heat and pressure caused gas to form and this expanded inside the molten rock.  This expanded space within the inside of the rock created cavities as the rock cooled and hardened.  The hollow cavities of the rock then filled with natural mineral enriched water.  Over eons of time, the rock dried out, the water evaporated and left the tiny, sparkly crystalized minerals.  Drusy was born.

Vapor deposition Titanium, Gold or Platinum are the most common used metals for coating Drusy.  The vapor deposited coating is very thin and very small amount of the metal is used.

Titanium vapor coating creates A rainbow of colors, blue, purple, red, and greenish drusy crystals will be created when Drusy is vapor deposition coated with Titanium.

Drusy is durable in jewelry being 7 on the Mohs scale for hardness.