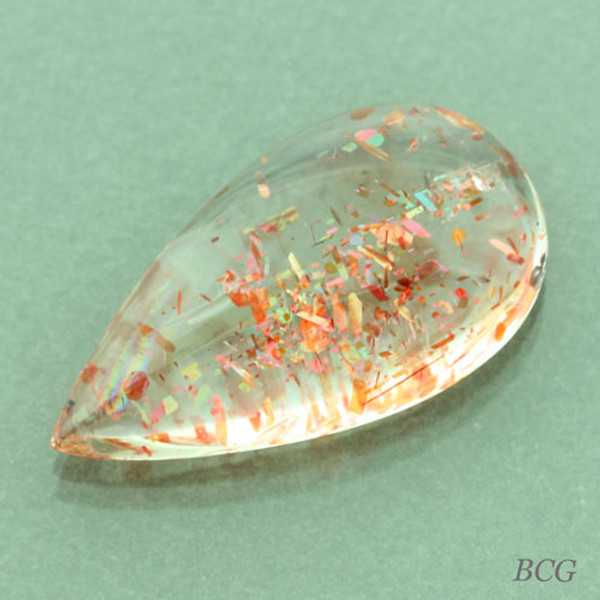 Copper Schiller Sunstone Cabochon from Tanzania!  This Sunstone cab is sometimes called Confetti Sunstone because the larger metallic copper platelets inside look like confetti. When the light hits it looks like copper mirrors inside the cab. Gem is much brighter then picture shows!  This gem is spectacular!!! Custom cabbed into a Pear, Teardrop.

Sunstone rates 6.5 to 7.2 on the Mohs hardness scale making it durable for jewelry just like garnet, amethyst and topaz.  This awesome Confetti Sunstone is a perfect gem for a unique jewelry piece such as a ring or a pendant!

Sunstone is formed in molten lava and is discharged onto the surface with the help of a volcano. The lava weathers away or is broken. Fine crystals of sunstone is then released. The Oregon sunstone is found with copper in it which is the cause for the range of colors in the stone from water color to yellow and many shades of green, red and pink.

Of all the gems on earth, Sunstone truly reflects the qualities of solar light.  Sunstone is said to bestow openness, warmth, strength, benevolence, mental clarity and the willingness to give blessings to others.  This stone can kindle the fire of leadership when you carry or wear it.  Sunstone is a gem of personal power, freedom and broaden your consciousness.